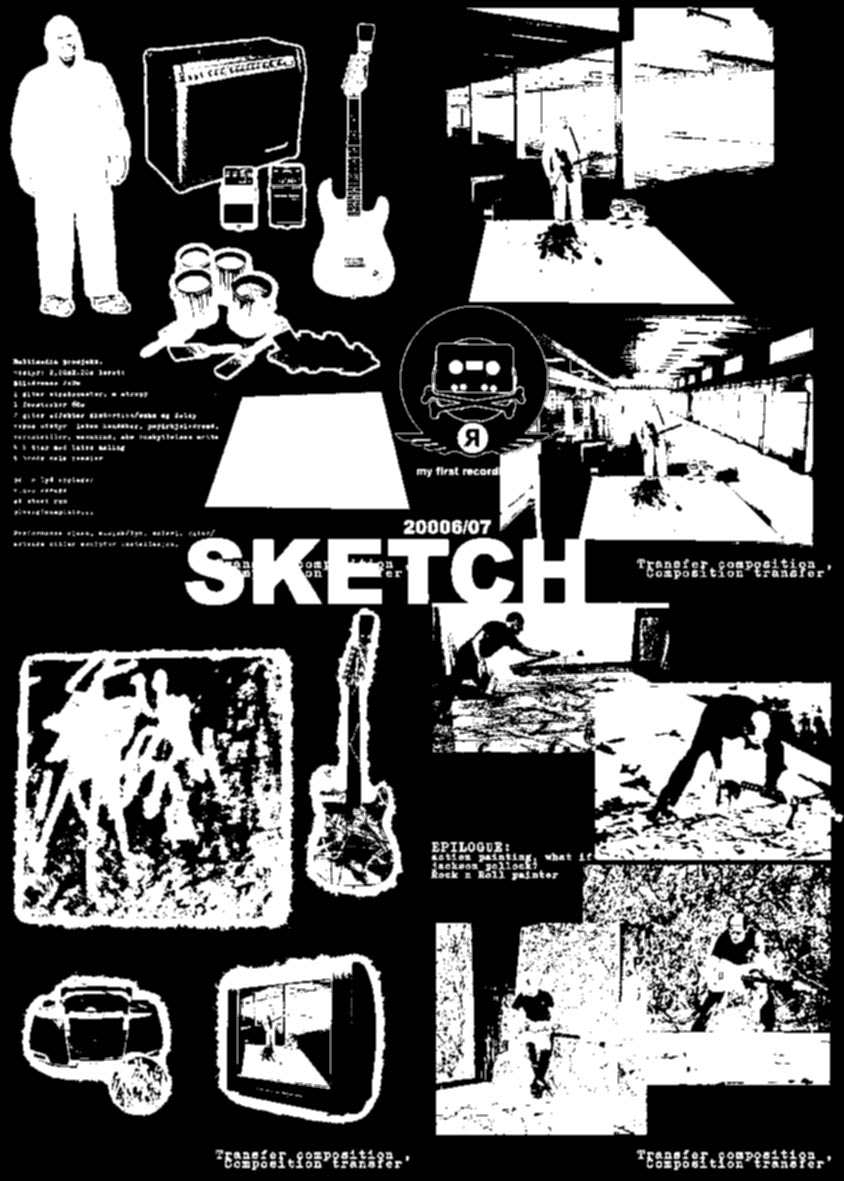 Transfer composition and abstract expressionism.
If you look at music; especially experimental or noise based and instrumental music and look away from the obvious visual aspects of this genera name, music still is most closely
Foreseeable Outcome:
And the name is Jackson Pollock.  You really cant make a paint drip without it having a Jackson Pollock signature to it, he has a monopoly on it. So I didn’t really set out to make Pollock and like anyone attempting to better Pollock or emulate him never really get it right, and never the way he did it. So confident that I wasn’t really making a painting but performing a composition that just so happen to transfer some paint onto the canvas, I was just going to do it with suspicions of a foreseeable outcome.

resembling abstract expressionism in technique and objective the attempt to convey through a composition; emotions or abstract ques to emotional responses.

The painting style used to convey the transfer of music onto a visual media resembles a style of American abstract expressionism, the drip painting and as such is easy to conclude that the visual and audio genre may be linked in style, intention and content.

Looking into the Pollock heritage and his influences I discovered a creative nexus in the early 50s of music and visual arts all kinds of art really, franticly searching for a new direction contemporary music like john Cale and abstract expressionism with Dekoning, Pollock and others departing from the European traditions. The similarity is not based on nostalgia but just like punk in the 70s the pioneer energy the novices first attempt to create something beyond his own comfort zone unable at first to distinguish the first step from destruction, the art of creation almost resembling destruction thereby moving the signposts of professional acceptability.

Music by its nature is abstract, in 1997 at the college of Santa Monica (California, USA), arts and new media dept. I saw illustrated the attempt to visualise sound and music by means of computers and advanced 3d graphics mostly in the shape of coloured geometric shapes, each sound and chord being designated by a certain shape and colour in motion  the result was a motion of visuals, signifying the played music. The idea is visual but doesn’t bridge the 2 arts completely, by making the visuals as abstract and as intangible as the sound, without physical mass or texture. Moving pictures and interactivity still limited to spectatorship.

Not all are made to be painters or musicians but everyone has an opinion or aesthetical preference in both arts  making them capable of creating such if given the right conditions and possibility to do so without having self-esteem and vanity hampering creative expression. Creative processes are a painful endeavour mostly because you have to believe that your passion has merits beyond craft and skill, to create something accessible by criticism. This creates a vacuum onto which only a though creative elite may work or dare profess a professional expertise giving them a monopoly on creative outlets and media of creative product criticisms.

What if Steve Vai painted? Ok perhaps not such a far fetched, trippy notion seeing that every merchandise of Steve Vai is represented by paint twirls, but more to illustrate the idea of what if instead of a novice but mastery and skill what if the virtuoso made this? A Steve vai master of guitar trickery and combine that with paintings skills of the renaissance painters. It would be pornographic flash in Thomas Kinkaid territory. Just imagining the corolation of craft vs. concept and delivery vs. message. To inspire others is it better to be virtouse or accessible?

Jackson Pollock the inventor of the creative DIY, just an idea back in the 50s he inspired Americans by the notion anyone could do it, or so was the response often heard after he was showcased as the great American painter. His style has a certain performance quality to it the images have a aura of coincidence and accident to them, something that bothered even Pollock it is speculated who prior to his drip paintings had had no success with his more figurative works.

The DIY punk quality is much like the sex pistols in creating something with a nowise quality something that is seemingly easy to emulate, but has a distinct signature. Spawning other outlets of creative expression most not so similar to their creative origin or inspiration.

What if Jackson Pollock, painted and played the guitar? Now there is an idea, a work in itself. That idea could by itself satisfy a creative concept, but for me it by itself didn’t it served as a sketch, a blueprint or prognosis of consequence.

What if; illustrates the potential of my own idea I’m no Jackson Pollock but I borrow his visuals and technique in my attempt to express a love for music and painting. Being fascinated by the energy of his drip/action paintings, and seeing the potential of the transfer of another type of energy or influence.

What if is a mind game a idea of options, what if Pollock’s paintings where the result of him playing  a guitar while painting, making just noises to coincide with his dance moves and flinging of  paint with a stick? Would he have been viewed differently? Would his work been something else?

These Pages: are an illustration of Jackson Pollock, a result of research and following the: what if idea; what if Jackson Pollock painted and played the guitar. Though that idea was a conclusion of the consequence the basic concept the idea wasn’t really that wild once I learned of his Jazz roots and his musical approach to painting. These pages chronicle excerpts from a host of articles and Wikipedia searches that sum up the originator of; abstract musical transferred expressionism.

SAMPLES FROM THE PERFORMANCE VIDEOS